What to Look For in a Fixer-Upper: Signs the Home Isn’t a Money Pit

What to Look For in a Fixer-Upper: Signs the Home Isn’t a Money Pit

Renovating a fixer-upper is not for the faint of heart. It takes money, hard work, and patience. But if you’re able to pull off a successful transformation, you’ll reap the benefits.

“Fixing up a house is an incredible opportunity, but should never be viewed as a TV show. It’s real life,” says Elizabeth Enright Phillips, a financial coach at Running Creek Properties in Lancaster, OH, who has renovated nearly a dozen properties.

Best-case scenario: You’ll end up building your dream home and increasing the value of the property. But fixing up a 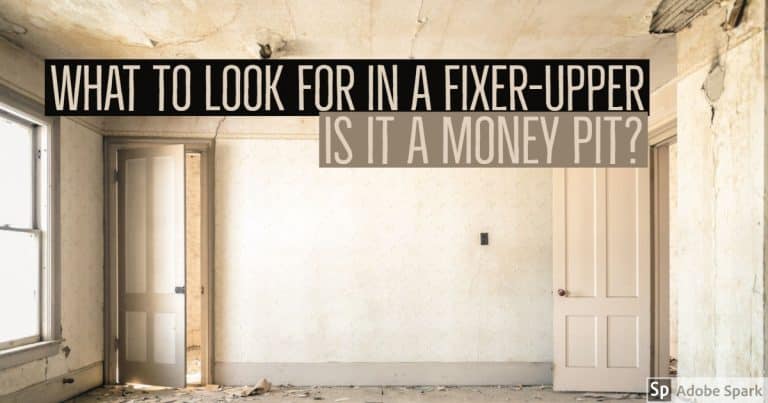 ramshackle house can cost a fortune. Unforeseen problems can surface that will make your fixer-upper a real money pit.

When looking at real estate listings, you’ll notice that no two fixer-uppers are the same. One may have sat vacant for a while, another may be in desperate need of a new roof, and another may have a mold infestation. Each of these scenarios will cost money to rectify, but some situations are more manageable than others.

To help you out, we tapped experts to identify the features and characteristics you should look for in a fixer-upper, to make the renovation go much more smoothly. On your hunt for that hidden gem of a fixer-upper, keep your eye out for the following signs.

A solid structure is ideal for any home, but it’s especially critical when you’re buying a fixer-upper. If the home has a crumbling foundation or serious roof problems, you’ll have to decide if you’re willing to pay to repair this type of damage.

These are the five important structural elements:

Mike Coughlin, owner of Summit Design Build in Stoneham, MA, says you can get a good idea of the house’s structure by exploring the basement, attic, and unfinished areas. Focus on those areas rather than the pretty, recent additions to the home.

“You want to look at the basement rather than the granite counters and new bathroom fixtures. All of that shiny stuff is really easy to fix,” says Coughlin, who is working on a nearly 300-year-old home that he bought with his wife, Francine. “The stuff behind the walls is what’s more important. As long as the bones are good, you can pretty much do anything.”

There’s a good chance that your fixer-upper will need plumbing work. Depending on the scope of the project, the work will be either a quick fix or a significant undertaking that will eat into your budget. Some fixer-uppers may have low water pressure (fairly minor problem), while others may have pipes that need to be replaced (a big problem).

Before buying a fixer-upper, make sure you’re comfortable with the amount of plumbing work required to bring the place up to snuff.

That said, you shouldn’t immediately flee any fixer-uppers that need plumbing work. If you really love the house, it’s all about balancing costs and diverting money from one project to another.

A logical layout is important in any home (no one wants to walk down a long hall to get to the guest bathroom), but it’s especially critical when you’re looking at an old home. Older homes are often divided into small rooms, but many people in this decade favor an open floor plan.

“The entire family wants to be connected; no one wants to be stuck back in the kitchen when everyone else is hanging out. With an open floor plan, there is no separation between the zones of the house,” says Jean Brownhill, founder and CEO at New York City–based Sweeten, which matches people who have major renovation projects with general contractors.

If you envision needing to knock down walls to create a more open, airy interior, know that the job can be expensive, time-consuming, and dusty.

Little to no infestations

It’s not uncommon to encounter a fixer-upper that has an infestation, be it mice, termites, mold, dry rot, or asbestos. A minor issue such as mice can be resolved by putting out traps and filling holes in the house. However, severe termite damage could require a costly solution, including lifting the house (yes, right off the ground) to access the foundation and check for further damage.

A seller is required to disclose such infestations, but a home inspector will also uncover any issues during the inspection that may occur after the house goes into contract.

If you find any of these problems in your fixer-upper, it’s a good idea to get an estimate from a contractor to resolve the issue.

Buying a foreclosed home that’s sat dormant for a few years might get you a low sale price, but it may also present a challenge when you start renovating it.

“You never know what’s going on with plumbing behind the walls,” Coughlin says of homes that stand empty for an extended period of time. Maybe the water wasn’t turned off properly in the winter, which can cause the pipes to freeze, split, and leak.

A home without humans can also become a refuge for critters such as squirrels and bats.

“We have found dead mice and rats and a live mother possum feeding her two babies in attics,” says William Begal, president of Begal Enterprises, a disaster restoration company in Rockville, MD.

All of these problems can be fixed—they’ll just add more to your bottom-line costs.

There is always something to considering when you are in the market for purchasing a home. The exterior and curb appeal may get you in but if the bones aren’t sound you have to make the decision as to whether you are willing to put the money into fixing the issues. Are you ready to take on a fixer upper and know the area you are looking to move to? Get in touch with one of our experienced agents who will be able to help guide you in the right direction!