The Upside of Florida Real Estate 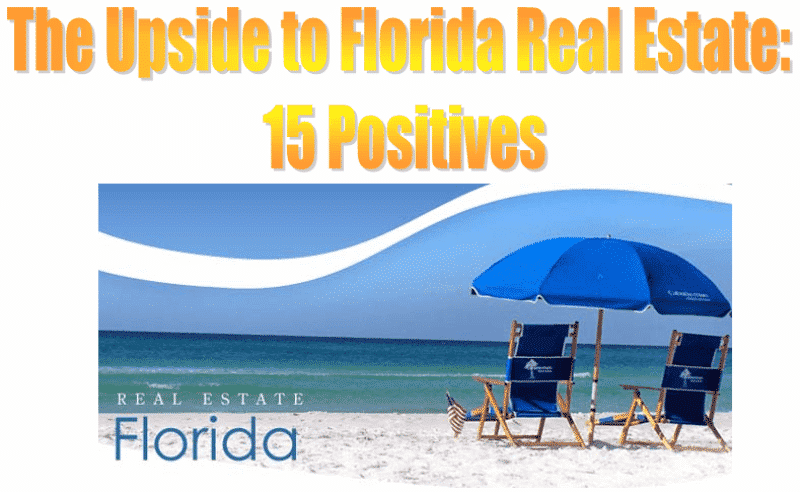 Florida Real Estate, The Upside: 15 Market Positives – Let’s take a look at some of the opportunities and positive indicators for the future of the Florida real estate market.

1. Great prices. Statewide, home prices have fallen about 20 percent in the past year. Florida Association of Realtors® statistics show the existing-home median sales price was $185,400 in the third quarter of 2008, compared with $233,200 in third quarter 2007.By the way, those numbers are still significantly higher than in the early years of the decade. In 2003, the third-quarter sales price was $163,700, which reflects an increase of about 13.3 percent over the five-year period. (The median is a typical Florida real estate market price where half the homes sold for more, half for less.)

2. The time is right. Florida real estate home sales volumes are rising again — a signal that the market recovery may be underway. In third quarter 2008, statewide sales of existing single-family homes were up 5 percent compared to the same period last year, according to FAR statistics.

3. High inventory levels. Conditions are ideal for buyers to find their dream home. Inventory is plentiful in all price ranges. But as sales volumes increase, inventory levels are likely to shrink. That reality translates into this advice for buyers: Don’t wait too long.

4. Low mortgage rates. Mortgage rates are still at the lowest levels since the 1960s. Lower rates multiply a buyer’s financial power. Even half a percent can make a sizeable difference. For example, on a $200,000 home, half of 1 percent could save the homeowner about $815 a year. Buyers can get more home for the money, which is a perfect scenario for families looking to upsize.

5. Incentives to buy. Federal, state and local housing programs can help buyers make that big purchase. The American Recovery and Reinvestment Act has increased the First-Time Homebuyer Tax Credit from $7,500 to $8,000 for purchases on or after Jan. 1, 2009, and before Dec. 1, 2009. Talk to a local mortgage lender about state and federal incentive programs.

6. A long-term-growth state. Long-term economic and demographic trends continue to favor Florida. By 2010, economists forecast that Florida will be the third-most-populated state in the country. Florida has been one of the 10-fastest-growing states in the U.S. for each of the past seven decades, and often the state has been in the top four, according to Census data.Population growth will continue to provide a foundation for other economic development, such as new jobs and growing incomes. All of these trends are positive indicators for Florida real estate growth.

7. A migration magnet. Even with a slowdown in economic growth nationally, projections call for Florida’s population to return to more normal growth levels of about 317,000 a year between 2010 and 2020, similar to the 1980s and 1990s, said Stan Smith, director of the University of Florida‘s Bureau of Economic and Business Research. That’s a lot of new buyers coming into the market.

9. A diverse economy. Florida’s economy, like the rest of the nation, is impacted by the recession. Some business sectors, though, appear promising for the Florida economy. The healthcare and technology sectors are quickly becoming an important economic force in South and Central Florida.The Milken Institute/Greenstreet Real Estate Partners ranked five Florida communities on its “Best Performing Cities Index 2008,” which ranks U.S. metropolitan areas by how well they are creating and sustaining jobs and economic growth. Florida’s business climate ranked fourth among executives and sixth overall on Site Selection magazine’s 2008 Top State Business Climate rankings.

10. Investment outlook. Every quarter, the University of Florida’s Bergstrom Center for Real Estate Studies conducts a survey of industry executives, market research economists, real estate scholars and other experts. In the fourth quarter 2008 survey, the investment outlook for various types of Florida real estate declined from the third quarter of 2008, although it is noted that the investment outlook remains higher than it was at times in 2006 and 2007.”We have 40 pages of comments from our respondents, and although the dominant theme is the disruption of financing, perhaps the second theme, as one person put it, is people being on the sidelines with full pads and helmets just waiting to jump back in,” says Director Dr. Wayne Archer, when referencing the 2008 third quarter results.

11. Homeownership has value. Florida Real Estate agents believe — and research supports the belief — that homeownership provides a variety of tangible and intangible benefits to the community and homeowners. Studies show that home equity is still the largest single source of household wealth.

12. Greater sense of well-being. Owning a piece of Florida real estate leads to increased personal well-being. Research shows that people who own their own homes tend to show higher levels of personal self-esteem and life satisfaction, which in turn helps to make homeowners and their children more productive members of society.

13. Beneficial for kids. Studies show that children raised in homes owned by their families are more likely to stay in school and graduate high school. They’re also shown to have a higher lifetime annual income.

15. An unsurpassed lifestyle. Finally, let’s not forget the things that brought people to Florida in the first place, and will continue to attract them — beautiful beaches, fabulous weather and a friendly business climate, with no state income tax. It’s no wonder that Florida’s combination of temperate climate, outstanding recreational amenities and economic opportunity has consistently put the Sunshine State in the top three of Harris Poll’s “Most Desirable Places to Live” survey.

If you are considering purchasing a piece of Florida Real Estate, you need to contact a licensed Florida real estate professional that will answer all of your questions with out any pressure.  Here at Bardell Real Estate that is how we operate.  We go at the clients pace.  Feel free to contact us.

The Upside of Florida Real Estate