“Sunshine Foundation’s sole purpose is to answer the dreams of chronically ill, seriously ill, physically challenged and abused children ages three to eighteen, whose families cannot fulfill their requests due to financial strain that the child’s illness may cause.”

For those who don’t know, the Sunshine Foundation is a non-profit organization founded in 1976 by Philadelphia Police Officer, Bill Sample. Bill Sample decided he was going to make a difference in these children’s lives. After taking out a personal loan and gathering a small group of dedicated volunteers, Bill founded Sunshine Foundation, the Original Wish Granting Organization, with the mission of answering the dreams of chronically ill, seriously ill, physically challenged and abused children ages three to eighteen, whose families cannot fulfill their requests due to the financial strain that the child’s illness may cause. Sunshine Foundation answered the first dream in January of 1977 for four year old Bobby, who dreamed of playing in the snow in the Poconos. Bobby’s dream came true just four short months before he lost his brave battle with Leukemia.

Sunshine Foundation has answered over 36,000 dreams and has been able to maintain that 82% of all donations go directly to children’s programs. Bill Sample remains the President Emeritus of Sunshine Foundation, which has become one of the most respected children foundations in the nation. 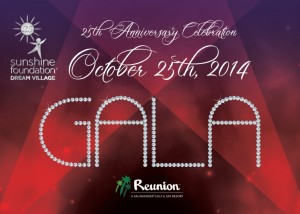 We believe in the beauty of dreams and to show our support we will be attending the 5th Annual Dream Village Gala on October 25th, 2014. This event invites local companies from the Four Corners area, and many more, to enjoy cocktails, dinner and dancing! There will also be a silent auction included to raise awareness and money for this organization. Tables are going quickly, so follow this link to purchase a table or make a donation.