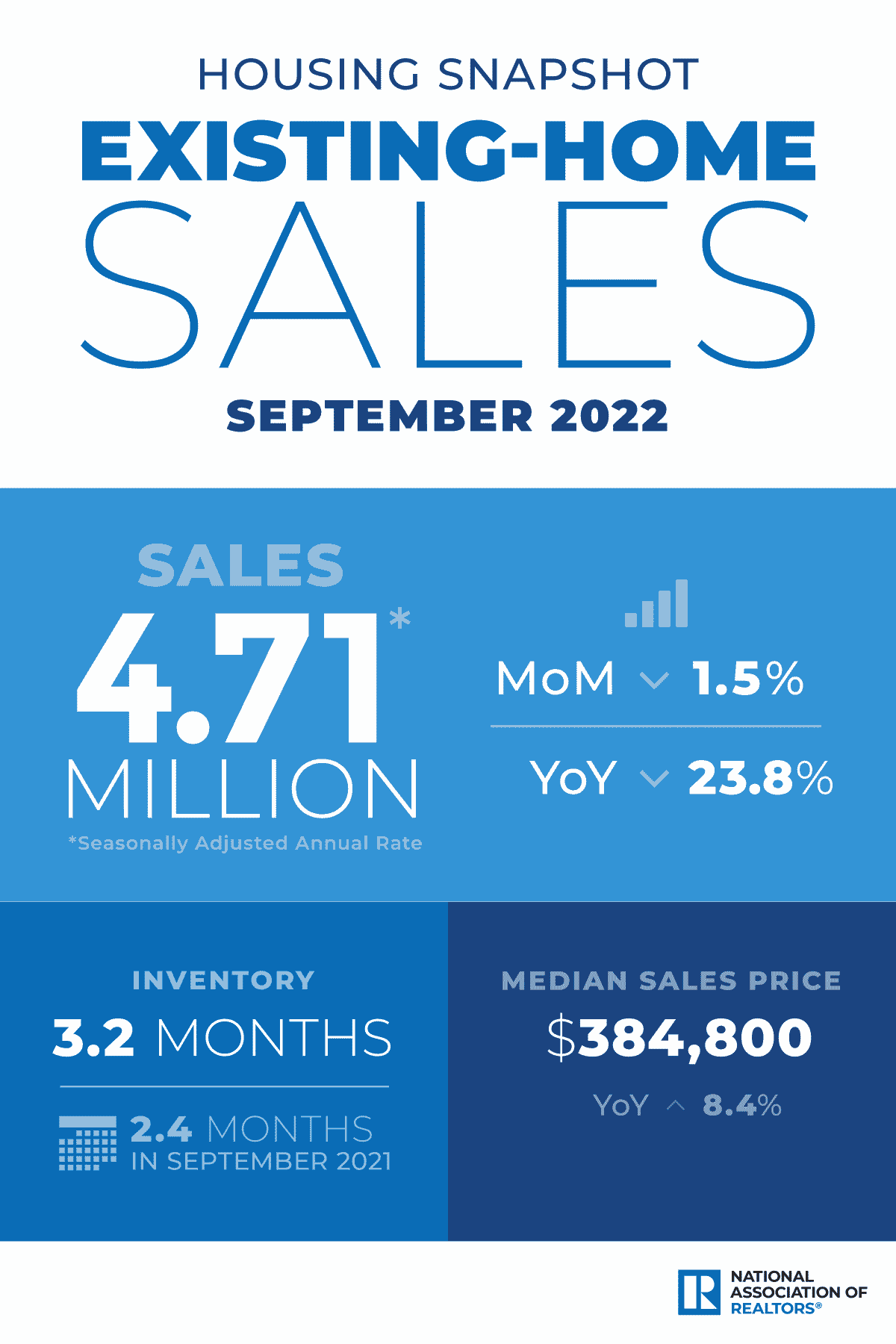 WASHINGTON (October 20, 2022) – Existing-home sales descended in September, the eighth month in a row of declines, according to the National Association of REALTORS®. Three out of the four major U.S. regions notched month-over-month sales contractions, while the West held steady. On a year-over-year basis, sales dropped in all regions.

Total existing-home sales,1 https://www.nar.realtor/existing-home-sales, completed transactions that include single-family homes, townhomes, condominiums and co-ops, retracted 1.5% from August to a seasonally adjusted annual rate of 4.71 million in September. Year-over-year, sales waned by 23.8% (down from 6.18 million in September 2021).

“The housing sector continues to undergo an adjustment due to the continuous rise in interest rates, which eclipsed 6% for 30-year fixed mortgages in September and are now approaching 7%,” said NAR Chief Economist Lawrence Yun. “Expensive regions of the country are especially feeling the pinch and seeing larger declines in sales.”

Total housing inventory2 registered at the end of September was 1.25 million units, which was down 2.3% from August and 0.8% from the previous year. Unsold inventory sits at a 3.2-month supply at the current sales pace – unchanged from August and up from 2.4 months in September 2021.

“Despite weaker sales, multiple offers are still occurring with more than a quarter of homes selling above list price due to limited inventory,” Yun added. “The current lack of supply underscores the vast contrast with the previous major market downturn from 2008 to 2010, when inventory levels were four times higher than they are today.”

The median existing-home price3 for all housing types in September was $384,800, an 8.4% jump from September 2021 ($355,100), as prices climbed in all regions. This marks 127 consecutive months of year-over-year increases, the longest-running streak on record. It was the third month in a row, however, that the median sales price faded after reaching a record high of $413,800 in June, the usual seasonal trend of prices trailing off after peaking in the early summer.

First-time buyers were responsible for 29% of sales in September, unchanged from August 2022 and slightly higher than 28% from September 2021. NAR’s 2021 Profile of Home Buyers and Sellers – released in late 20214 – found that the annual share of first-time buyers was 34%.

Individual investors or second-home buyers, who make up many cash sales, purchased 15% of homes in September, down from 16% in August, but up from 13% in September 2021.

Distressed sales5 – foreclosures and short sales – represented 2% of sales in September, a marginal increase from 1% in August 2022 and September 2021.

Existing condominium and co-op sales were recorded at a seasonally adjusted annual rate of 490,000 units in September, down 5.8% from August and 30.0% from one year ago. The median existing condo price was $331,700 in September, an annual increase of 9.8%.

“Buying or selling a home involves a series of requirements and variables, and it’s important to have someone in your corner from start to finish to make the process as smooth as possible,” said NAR President Leslie Rouda Smith, a REALTOR® from Plano, Texas, and a broker associate at Dave Perry-Miller Real Estate in Dallas. “REALTORS® rely on in-depth knowledge of the market and objectivity to deliver trusted expertise to consumers in every U.S. ZIP code.”

The National Association of REALTORS® is America’s largest trade association, representing more than 1.5 million members involved in all aspects of the residential and commercial real estate industries.

For local information, please contact the local association of REALTORS® for data from local multiple listing services (MLS). Local MLS data is the most accurate source of sales and price information in specific areas, although there may be differences in reporting methodology.

NOTE: NAR’s Pending Home Sales Index for September is scheduled for release on October 28, and Existing-Home Sales for October will be released on November 18. Release times are 10 a.m. Eastern.

1 Existing-home sales, which include single-family, townhomes, condominiums and co-ops, are based on transaction closings from Multiple Listing Services. Changes in sales trends outside of MLSs are not captured in the monthly series. NAR benchmarks home sales periodically using other sources to assess overall home sales trends, including sales not reported by MLSs.

3 The median price is where half sold for more and half sold for less; medians are more typical of market conditions than average prices, which are skewed higher by a relatively small share of upper-end transactions. The only valid comparisons for median prices are with the same period a year earlier due to seasonality in buying patterns. Month-to-month comparisons do not compensate for seasonal changes, especially for the timing of family buying patterns. Changes in the composition of sales can distort median price data. Year-ago median and mean prices sometimes are revised in an automated process if additional data is received.

4 Survey results represent owner-occupants and differ from separately reported monthly findings from NAR’s REALTORS® Confidence Index, which include all types of buyers. The annual study only represents primary residence purchases, and does not include investor and vacation home buyers. Results include both new and existing homes.

5 Distressed sales (foreclosures and short sales), days on market, first-time buyers, all-cash transactions and investors are from a monthly survey for the NAR’s REALTORS® Confidence Index, posted at nar.realtor.