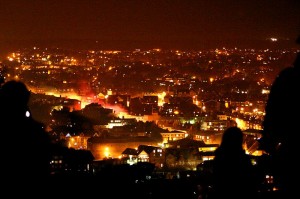 After Queen Elizabeth passed in 1603, the Catholics that were oppressed under her rule hoped that her replacement, James I, would be a little more conscious of their religion. Unfortunately, James was no more tolerant than the Queen.

13 young men, better known today as extremist, under the leadership of Robert Catesby came to know the murderous plan of “The Gunpowder Plot”. The idea is to hold 36 barrels of gunpowder in the cellar of the House of Parliament. In doing this, they would kill the King who would be sitting right above the barrels for the Opening of Parliament the next day. They might have even killed the Prince of Wales and also the rest of the House who made it difficult for Catholics.

As the plan was solidified, it was obvious that innocent people would be killed in this attack, including some people who stood up for the Catholics. Some of the men began having second thoughts, one even sending a letter to his friend warning him to stay away from the Parliament on the 5th of November.

To much surprise, the letter found its way to the King who demanded to have the plot stopped immediately. Guy Fawkes, one of the 13 men, was found in the cellar with 36 barrels of gunpowder when authorities learned of this plot and stormed in. He was caught and sentenced to the traditional traitors’ death, ‘to be hanged, drawn and quartered.’ It was this night that the skies of England lite up in celebration of the King.

Celebrations vary from community to community. Lewes, just South East of England, is famous for British Bonfire Night and consistently attracts thousands of people. 400 years later skies still light up, traditions carry on and we are joining in the festivities on November 8, 2014. This event will be held at the Fields at Formosa Gardens just west of the I4 exit for Hwy 192 and will include many activities like food, bounce houses, and entertainment! Follow this link to learn more about this event. Hope to see you there!