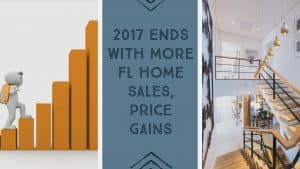 Keeping up with single-family homes selling in your area can be fun and exciting! Yet, trying to determine how the year is going progress and end is nearly impossible however, 2017 kept a lot of it’s realtors on their toes. It ended in a bang with uplifting news for the Orlando Home for Sale!

ORLANDO, Fla. – Feb. 13, 2018 – Florida’s housing market wrapped up 2017 with more sales, higher median sale prices and fewer sales of distressed properties compared to the year before, according to the latest housing data released by Florida Realtors®.

“This past year, the still-tight inventory of homes for sale in Florida couldn’t meet growing buyer demand,” says 2018 Florida Realtors President Christine Hansen, broker-owner with Century 21 Hansen Realty in Fort Lauderdale. “If supply could have kept pace, home sales likely would have been even stronger in 2017 – and of course, the state also felt the impact of Hurricane Irma that made landfall in the Keys on Sept. 10, 2017.

“Florida’s economy is growing, the jobs outlook remains strong and more people are moving to the Sunshine State. And while mortgage interest rates are rising, they are still at favorably low levels. All of these factors are positive signs for the state’s housing market in 2018.”

Statewide closed sales of existing single-family homes totaled 271,868 in 2017, up 1.2 percent compared to the 2016 figure, according to data from Florida Realtors research department in partnership with local Realtor boards/associations.

The statewide median sales price for single-family existing homes in 2017 was $237,500, up 8 percent from the previous year. New pending sales for existing single-family homes rose 0.1 percent in 2017 compared to 2016.

“Overall, 2017 was a strong year for single-family home resales in Florida,” says Florida Realtors Chief Economist Dr. Brad O’Connor. “New listings of existing homes priced between $200,000 and $600,000 were up in a significant way compared to 2016, but these properties were quickly absorbed thanks to strong buyer demand driven by Florida’s booming economy. As a result, mid-range inventory remained somewhat flat on a year-over-year basis, while the number of listings priced below $200,000 continued to decline dramatically.

“Annual sales growth in Florida’s resale market for single-family luxury homes nearly ground to a halt in 2016, but this segment experienced a decent uptick in sales in 2017. Fewer new listings and more realistic pricing expectations by sellers were likely contributors to this renewed growth. The housing shortage impacting Florida and the rest of the nation continues to be contained to the lower price tiers, whereas the opposite issue – an overabundance of listings – is having the opposite impact on many local luxury markets.”

The interest rate for a 30-year fixed-rate mortgage averaged 3.99 percent for 2017, up significantly from the previous year’s average of 3.65 percent, according to Freddie Mac.

Statewide closed sales of existing single-family homes totaled 63,436 in the fourth quarter of 2017, up 2 percent compared to the year-ago figure, according to data from Florida Realtors research department in partnership with local Realtor boards/associations. Closed sales typically occur 30 to 90 days after sales contracts are written.

“The fourth quarter figures show that the vast majority of Florida’s local housing markets recovered quite quickly from Hurricane Irma,” O’Connor notes. “Closed sales were up year-over-year, and prices continued to climb as if nothing happened at all. Inventory continued to fall in the fourth quarter as well, so the longer-term trends in the housing market as of the beginning of 2017 appear to have remained in place at year’s end.”

The statewide median price for townhouse-condo properties in 4Q 2017 was $175,000, up 6.6 percent over the previous year. New pending sales for townhouse-condos for the quarter increased 8.7 percent compared to a year ago, while new listings rose 6.8 percent.