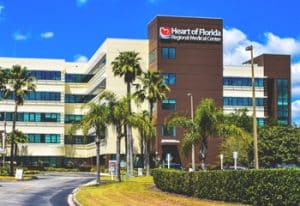 FOUR CORNERS — Residents in this burgeoning area soon will have another option if they need to go to the emergency room.

Heart of Florida Regional Medical Center in Davenport will break ground Wednesday on a new state-of-the-art freestanding emergency department in the region where Lake, Orange, Osceola and Polk meet.

The 12,000-square-foot facility will be constructed on the northwest corner of U.S. Highway 192 and Avalon Road, about two miles east of U.S. Highway 27. Completion is expected in the spring.

In June, South Lake Hospital initiated construction on a two-story, 40,000-square-foot freestanding emergency department at 550 U.S. Highway 27, just north of U.S. 192. The $13 million facility is expected to be completed by August.

When the new ERs open, residents and vacationers in the area no longer will have a long drive to access emergency care, either at Heart of Florida or South Lake Hospital in Clermont, which are about 27 miles apart on busy U.S. 27.

In both cases, the ER will be about 15 miles from the main hospital campus.

“Heart of Florida has served the Four Corners community for several years,” said Ann Barnhart, CEO of Heart of Florida Regional Medical Center. “We are pleased to expand services to better serve the healthcare needs of residents choosing to live and visit this growing area.”

“It’s a multimillion-dollar investment in the community,” said Tracey Guerrero, marketing director for the 193-bed hospital, part of Community Health Systems, which has 21 hospitals in Florida, including Dade City, Lake Wales, St. Petersburg and St. Cloud.

Other Lake County hospitals also are in the process of major construction projects.

At Leesburg Regional Medical Center, a $27 million, 48,000-square-foot expansion includes enlarging the ER, adding a two-story addition to the east side of the hospital, with an observation unit on the second floor, and 24 new emergency department beds on the ground floor. The project should be completed by spring.

In Tavares, Florida Hospial Waterman’s massive $70 million, 111,000-square-foot project, which started in July, will double the size of its ER to include 58 beds and add a new four-story patient tower for women and children’s services with 24 beds. Construction is expected to be completed by early 2019.

Meanwhile, Guerrero said the Heart of Florida Four Corners ER will be able to deal with anything from broken bones to severe illnesses.

“It will be a fully operational emergency department with the ability to handle most patients,” Guerrero said. “If a higher level of care is needed, the patient can be transferred to Heart of Florida or other facility.”