Cost of living in Florida 2022

Cost of living in Florida 2022 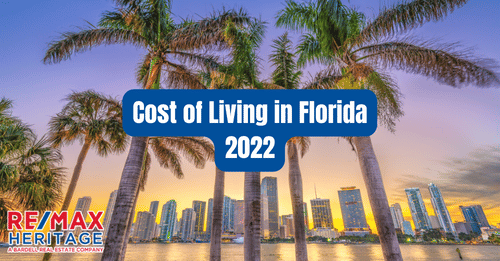 The Sunshine State’s beaches and warm climate are a powerful draw. Florida is attracting new residents in droves — it was the number one state that people moved to in 2021, according to a recent study by Move.org. And it’s no wonder: Two Florida cities appear on Bankrate’s newest rankings of the best places to live in America, and the state tops our list of best states for retirement.

One of our best places to live in Florida is Tampa, a city that actually skews young, rather than retirement age, thanks in part to its numerous colleges and universities. Other top-rated cities include Jacksonville, Gainesville and Orlando, which all receive high marks for affordability and job offerings.

For a long time, Florida had a reputation of being one of the more budget-friendly states in which to live. But that appears to be changing as the cost of housing trends ever upward. As of August 2022, median sale prices for homes in the state reached $407,000, according to Florida Realtors data. And Miami was labeled the least affordable city in the nation for renters by a Realtor.com report issued earlier this year.

What’s the average cost of living in Florida?

Housing is a big piece of the puzzle when it comes to overall cost of living — but it’s not the only piece. There’s also what you’ll need to pay for daily essentials like food and transportation. According to MIT’s living wage calculator, a single adult with no children would need to earn a minimum of $35,858 to make ends meet. Here are some key costs to consider if you’re thinking of moving to Florida:

Whether you’re seeking to rent or buy, there’s a great deal of competition for homes in Florida. The influx of people moving from pricier parts of the country is pushing up prices and squeezing many longtime residents out of the market, particularly those in lower-paying jobs. And be sure to look into the cost of homeowners insurance in Florida, which may be high due to potential damage from hurricanes and other risks.

On the buyer side, the $407,000 median sale price for single-family homes represents a 15 percent year-over-year increase, say Florida Realtors. And the median price for a condo or townhouse, $305,000, is an increase of more than 20 percent. However, there are signs that inventory is increasing, which may help ease prices.

Utility costs in Florida are 3 percent higher than the national average, according to RentCafe. Average monthly utility bills in major cities run well over $100. In Orlando, home of Disney World, utilities cost a steep $185 per month on average, while in Miami, monthly bills are typically around $128.

Amid the inflation pressures sweeping the nation, food prices in Florida have been rising. The cost of typical grocery items, like baked goods, meats and produce, rose 15 percent between 2020 and 2022. According to MIT’s living wage calculator, food costs in Florida run about $3,351 per year for a single adult with no children. For a family of four, two adults and two children, that figure rises to $9,856.

Unlike many other living costs in Florida, transportation is about 1 percent less expensive than the national average. MIT’s data puts annual transportation costs in the state at $5,509 for one adult. For a family of four, that cost ticks up to $15K.

The state of Florida has no income tax for individuals, according to the Tax Foundation. It does, however, charge a 6 percent sales tax. Property tax rates in Florida vary by county but average about 0.91 percent of a property’s value. That puts it right near the national median — it ranks 26th out of the 50 states in property taxes.

Florida offers a robust job market. The state’s largest employer is the Publix supermarket chain, which is headquartered in Lakeland, followed by — no surprise — Walt Disney Parks and Resorts. (Grocery chains and amusement parks loom large in Florida’s employment scene, as Winn-Dixie and Universal Orlando also rank among the state’s top employers.)

Ready to move to Florida?

Before relocating anywhere, it’s a good idea to visit and explore the different areas where you might consider living. Daily expenses, job opportunities, healthcare offerings and entertainment options can vary significantly from place to place, even within the same state. Use Bankrate’s cost of living calculator to determine the differences from one Florida city to another — for example, the cost of living in Miami is more than 25 percent higher than it is in Jacksonville.

If you’re looking to buy a house in Florida, be sure to work with an experienced local real estate agent. An agent who knows the intricacies of the local market can make all the difference on your house hunt, especially if you’re moving from out-of-state. Ask friends and family in the area for referrals, and if you see a “for sale” or “sold” sign in a neighborhood you’re interested in, reach out to those agents as well.

If you are buying or selling real estate it’s quiet often the single most important financial decision you make. For the last 30 years we have helped clients buying and selling property in Orlando and the surrounding areas. Put simply, this means the knowledge and expertise accumulated over this time ensures our clients get the best representation possible.

Our experienced agents will help and guide you through the entire process providing valuable support every step of the way.